Welcome to another update from Quorn Wagon and Wagon. This weekend has seen the van train running, the station reverting back to 1968 and the LMS brake van painted into top coat. The BG (81382) has also been outshopped this week, and looks marvellous (well done to Jamie Swanson and Patrick Newborough, it looks excellent)!

Van train heading Up past Quorn. 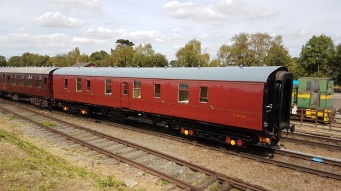 The weekend has seen the LMS brake painted up into top coat (bauxite). On Saturday Morning, I began by sanding the dock side of the van, whilst Nick set up the scaffold tower, and scraped the West side of the van. Once the van was sanded, it got a quick blow down with the air line, in preparation for the application of the wood primer.

Some of the veranda wood had also been stripped of paint, so these got a quick spray of primer too. The primer was given some time to go off, and then the undercoat was applied all around, including the ends, and verandas. 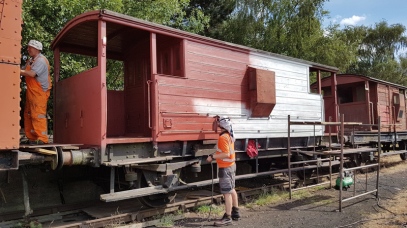 an interesting outfit for spraying, which led to my legs taking on a rather pinkish hue.

Whilst I was spraying the undercoat, Nick found that he could peel the paint of the LMS box van (M500xxx) as the bitumen paint underneath the top coat was getting warm in the sun, so he spent a while doing that, and then in every other opportunity in the weekend.

On to Sunday, which saw the van having the top coat applied, including in the veranda. The verandas on the van are quite large, which make them easier to spray. The BR brake was a pain, due to only being the width of a person, so the air pipe and my clothing kept catching the wet paint. 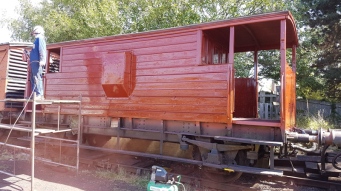 After the top coat was applied, it was left to go off. The new planks got a second coat, then both the van sides got a second coat. Matt follow me around with a paint brush, picking up areas the spray gun couldn’t get into. He also painted an inspection hatch he’d made in the interior. In addition to this, he’d also manufactured a new wooden backing plate for the wagon label clip for the dock side of the van.

We have also cut out the interior seat side panels, which can be fitted next week.

Next weekend should see the van’s handrails picked out and the windows changed all round. These have been ordered (in glass effect perspex) and we await delivery.