At Quorn Wagon and Wagon this weekend, we have been continuing our efforts on the Southern brake van, S56010. Matt has also continued painting the Caledonian Weltrol, M300356, in readiness the the Great Central Great War event.

Saturday saw us receive the new framing for the north end veranda. The carpenter had replicated as much of the features of the beams as he could with them away from the van. This left Nick and I to do a little bit of fettling on site to make the pieces fit in the steel frame of the van. 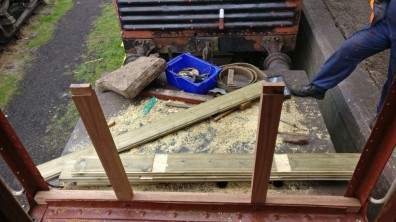 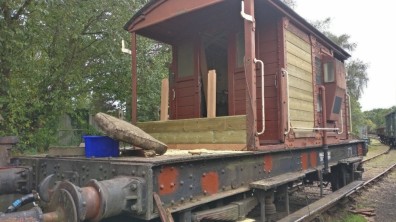 The new cladding planks ordered for the van ended up being too thick for most places around the van (aside from the doors), including for the ends. On this end, I had to rebate each new plank  for the post for sit in, so that the planks wouldn’t bow outwards. the rebates can be seen in the picture above. I had to further rebate the end of each plank to accommodate the door hinge timber, which sits in the corner upright.

Before assembly, the rebated areas were painted with wood primer. Jake then went round the van and painted any bare external timbers with wood primer, in readiness for undercoating. The south end veranda top beam also got treated with some filler, and then multiple coats of wood primer. Matt also cut and fitted some filler pieces to the top of the door hinge timber to fill on for a piece that had to be removed in construction 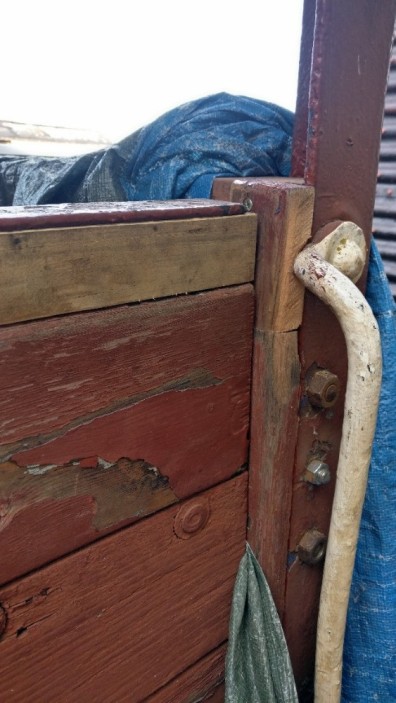 At the south end, the west side door was remove from the van, and some remedial work took place on the door hinge timber. Rust had built up behind the steel corner post, which subsequently closed up the door way, making the door stick. Once back together, the door had an even gap all the way down the shut side, and opened much better.

Jake, still having the primer and a paintbrush in his hand, painted the bare areas of the north end veranda internally and externally. Matt took this opportunity to finish off the Weltrol. During the course of the weekend, Matt also did the signwriting on the replica wagon plates for  the Southern brake.

Matt and I primed the interior of the van, in preparation for the interior repaint which Matt is undertaking during the week, after his early shifts. There is still some scraping to do on the body sides and the south end veranda, then we shall be painting it!