Welcome to another update from Quorn. It has been a bit quieter for us this week as Nick was away camping, which left Matt and I on Saturday. Jake joined us on Sunday, with Nick coming to inspect on Sunday evening.

Due to the weather, Saturday was a small jobs day. Matt and I initially went to B&Q to get a few supplies such as fluorescent light tubes and round headed wood screws. We fitted a new light tube in the saloon of the coach, which had been broken during a jumper removal. Having the folded and painted the defect book holder in weeks previous, Matt sign wrote them in the comfort on the Test Car. Once sign written  and dry, we fitted them to the BR van currently stopped due to wheel damage (B954268) and the LMS brake van, situated in the down lieby (M730562).  Having sorted these vans out, we then journeyed to Swithland to fit the defect book holder to the Southern brake van (S56010). The 2 operational brakes have also been kitted with PCV first aid kits. We are planning to build some boxes for these, some they look more period appropriate. 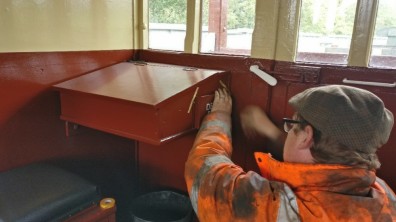 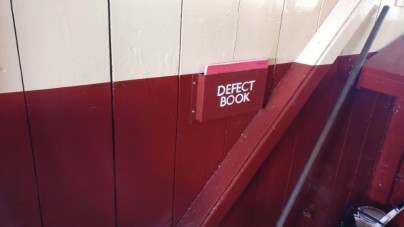 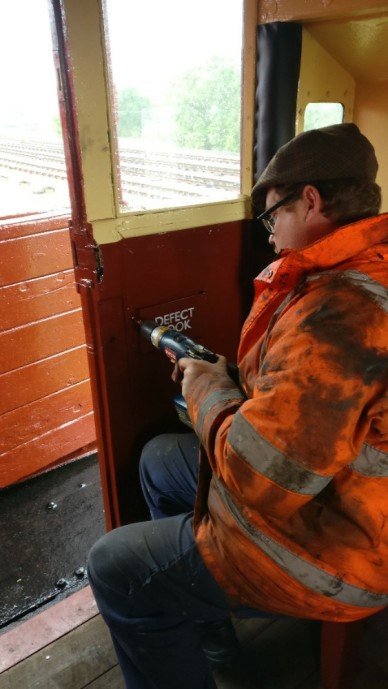 After viewing our 3 most recently outshopped vehicles, we returned from Swithland. The weather dried up, so we started to mask the windows using a window film obtained from Toolstation. After much struggling and faffing the windows were masked. Doing the masking gave the the bodyside time to dry allowing us to continue filling the final few areas on the coach. 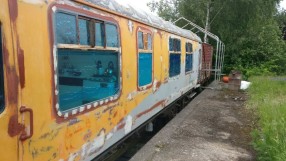 On to Sunday, and it the hope of getting paint on the coach. First though, a bit of light sanding and cleaning down. jake use the blowgun to get rid of the heavy areas of dust , and I used some tack cloths I had bought in the week that helped to remove the dust from the bodyside. 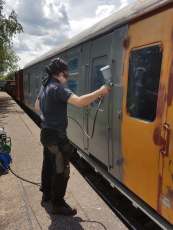 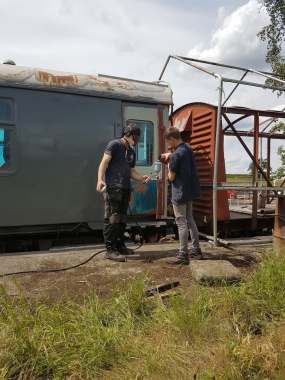 and then painted some more.

Only issue being is that the weather, being British and changable, started to rain before I could to the lower line. However in a gap in the rain, I completed the lower line but not without some damage to the paint already applied.

Finally, the 2 lines were done.

That concludes this week’s work. Next week we are planning to continue with the repaint of the Test Car, with the next stage of the livery being applied. Thank for reading!