With our thanks to the Ops department, we are back in our usual position with Test Car on the front road and our next project brought up from the yard. First task a brake test to find out how the two vehicles behave. B507489 held vacuum for 10 minutes with B505313 being no better after fitment of a Branch pipe, the original one having long since perished, new vacuum hoses were fitted all round. 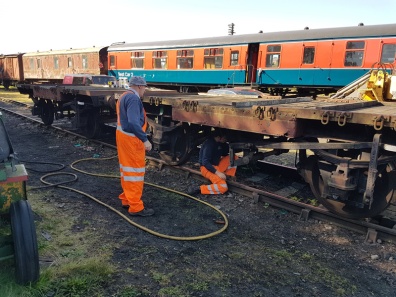 So next we looked at the Release Valves.  Both were removed and overhauled by Dave. This has become second nature to him and both valves were done very quickly. 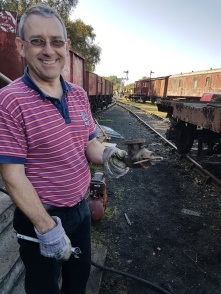 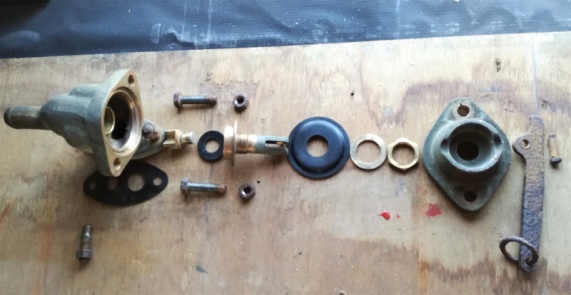 The next test and B505313 held for just under an hour but no change to B507489.  With only one 15″ rolling ring in stock B507489 was chosen to receive it. With the “Lighter” cylinder the decision was taken to drop it manually rather than use the loading shovel.

Once out it was split and found to be in remarkable condition. A quick hoover new ring fitted, rebuilt and refitted to the vehicle. 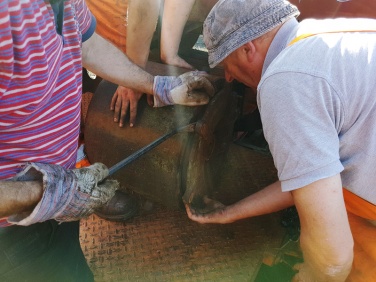 A final test and after 3 hours it was still holding and another Defect Card filed.

Whilst this was going on, my attention was on BD4303B, voids were filled with expanding foam. Surface and full cracks, as well as dents, were scolloped out. 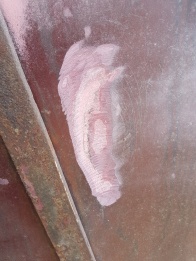 One of the doors had a hole straight through it. The top hinge was unbolted, loose fibreglass removed. Tape was applied to the inside and again the void filled and taped over

Full through cracks received a fiberglass matting and resin to restore strength and then a fiberglass filler applied along with the other areas prepared earlier. 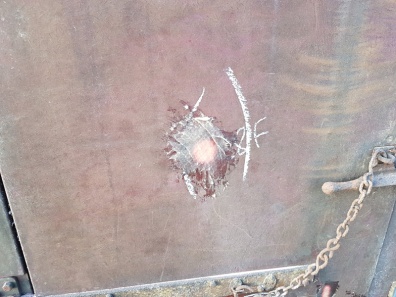 Finally, for Saturday we welcome Eddie and Harry who have started with the paint preparation removing loose paint and verdigris.

On to Sunday and the weather was not in our favor.  Despite this Ross and I continued with work on Nicks Container.  The areas of foam added were cut down, scolloped exposing original layers of Fiberglass

Matting was then resined into position to provide strength and support, this will then have a layer of filler applied to restore the smooth outer layer although only if we have a drier day.

Ross’s task was to begin the sanding of previously applied resin and keying of the gelcoat ready for painting,  we would have liked to of restored the gelcoat fully, unfortunately working outside this is ni on impossible.

Nick replaced a number of floor planks as well as removing the remains of the bottoms of the chain boxes.  These have not faired well so the decision has been taken to open them up to limit further rot 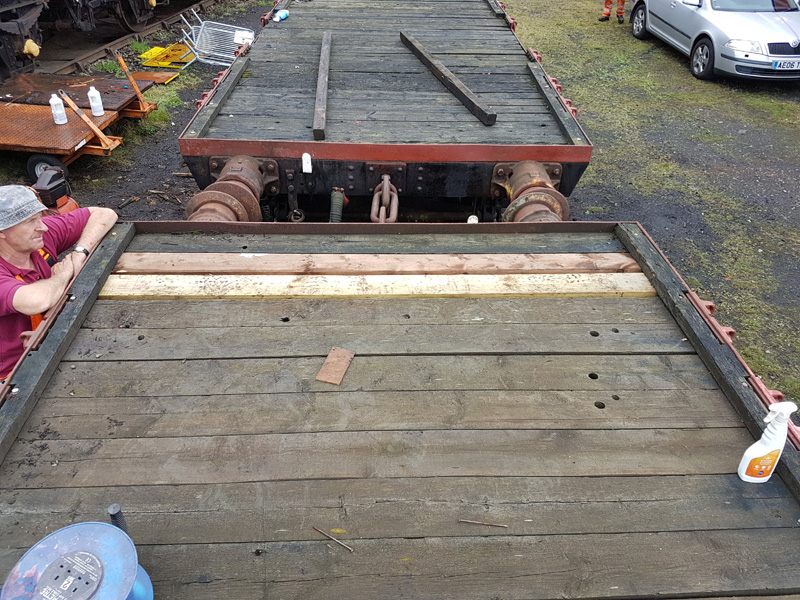 Eddie and Harry continued with their cleaning regime, with the conflats complete they moved on to E280364

With rain towards the later half of the day Ross and I took a trip to Swithland to fit our refurbished first aid kits to our brakevans, replacing the modern kits with more period looking items.

Being at Swith also gave us a chance to see our latest van with the rest. With all of our restored vans in the one train,  well all apart from the fishvan and tool van. 15 Bauxite vans in one train, is there anywhere else that can offer this? 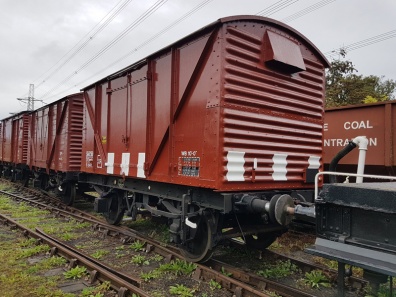 Our final image.  The two proud Container owners with there rare items.