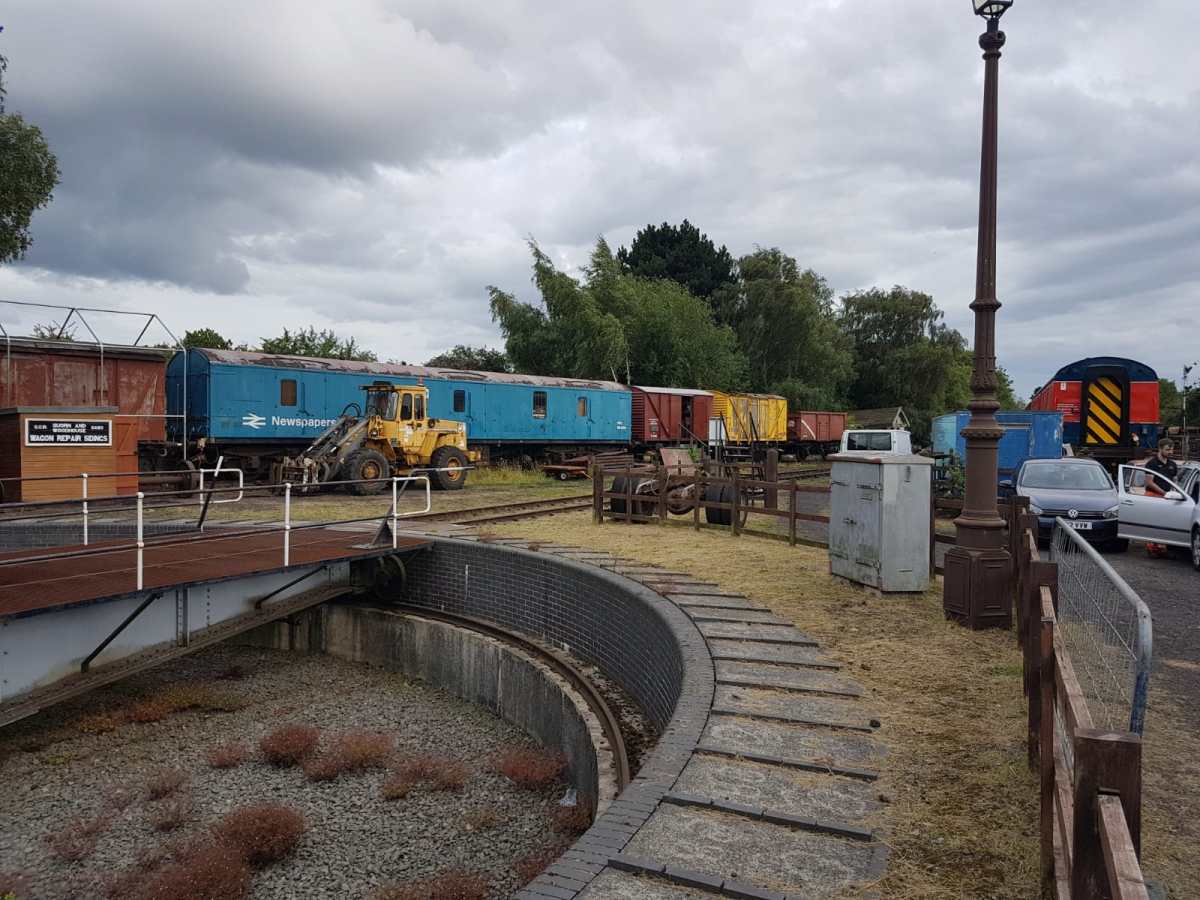 First thing to deal with is the arrival of box van, B786181. Thanks are due to East Midlands Railway for their very kind donation of this vehicle from their Neville Hill depot. It touched GCR metals on Wednesday 22nd July and was shunted into the dock road for our further attention.

On Friday Dave and Matt had got Madge set up in position for the goods display set up in the yard for interest when the the railway reopened on Saturday.

First things first, with no door on the ‘new’ van, and a very spongy floor it was decided to remove the ‘floor’ to make it obvious to any one that the floor wasn’t one.

Matt got stuck into the Mineral using a new toy to rivet the repair plates he’d prepared last week to the body. Dave, Nick, Jake and I concentrated on replacing the vacuum cylinder under the Medfit. The wagon was pushed into position and the Volvo used to remove the current cylinder from the wagon, which was replaced with one Nick and I had overhauled last week. We also built a shed which would have otherwise been burnt, and attached a sign that Matt had signwritten and stored in the GUV.

In between downpours the cylinder had the release valve fitted and was piped up to train pipe. The test set was extracted and used to leak test the installation, and then apply and release the cylinder repeatedly. The wagon was then pushed down and the brakes were applied for one final time to see how long they would hold. Eddie and Harry continued prepping this wagon for paint by removing the algae/verdigree from the wagons, and continuing to scrape the body.

Rain had stopped play on the Mineral for Matt, so we pushed that down to changed the 15″ cylinder with another one Nick and I had overhauled. The cylinder got re-hung but we weren’t able to finish connecting it up.

Onto Sunday morning, and a swift, well aimed kick at the Medfit proves the brakes are still holding which means they’ve held for more than 12 hours (they went on to hold for over 24 hours). Nick had gone to Rothley to assist Jamie with further welding on the Yellow Coach. I popped to Quorn to let Dave in and then hung around to help him finish connecting up the mineral’s cylinder. With Matt having arrived, I went to Rothley to continue my efforts wiring the Yellow Coach, assisted by Jake. I estimate there’s half a day left underneath the coach before I move inside the coach to continue in there.

Back at Quorn, Dave and Matt continued working on the mineral wagon, fibreglassing holes in the bodywork and painting the remained interior with Black bitumen. The vacuum system was also tested to prove the overhaul and the modification. Both the leak test and application test passed which means the vacuum system requires no further work.

Nick, Jake and I returned from Rothley and spent a little time on the new arrival, seeing if the buffers could be jacked out. When OLEO buffers are left compressed, they can stick it which is what had happened with all four on this van. Thankfully, with some persuasion, all four buffers extended back out. We shall monitor these for the time being to check they will work as expected. With the Vacuum test set still out we tried the brakes on the new van. Much to everyone’s surprise a vacuum of 20in Hg was achieved and the brakes applied. The cylinder applied, but the subsequent release was hampered the dry brake rigging and the cylinder itself. The brakes were persuaded to be released and the van shuffled down, with the Mineral and the Medfit put away on top. That finishes up this weekend’s work. The team will be back next week, prepping both the Mineral and Medfit for paint.