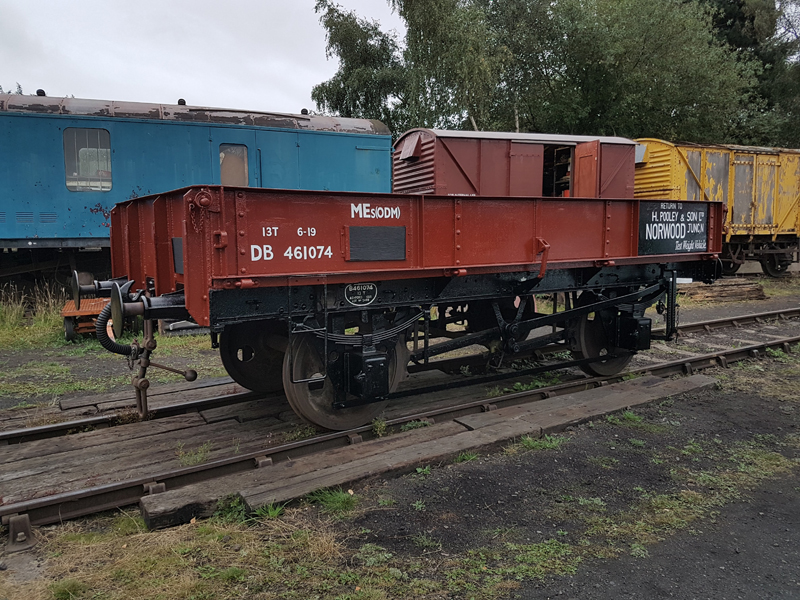 Final push for Medfit 461074 as Dave and I apply the livery details. First application of black panels on the right hand end of each side.

I began by chalking and then applying the details on the left hand end of the vehicle.

Whilst Dave and I attended to the Medfit, Nick began 786181‘s restoration. First task for this vehicle to remove the rust from the top of the underframe and clean up and inspect the brake rigging.

As I continued signwriting awaiting for the black to dry dave painted the white and red details, hand brake ends, lamp irons and swan necks.

Whilst I applied the lettering Dave painted the chalkboards, including undercoat and top coat to the one manufactured last weekend. During application and because of the rain a makeshift rain cover was required.

Sign writing continued on to Sunday with the right hand end of the east side, including the need for the rain shelter again.

Ross applied the final touches to the Medfit, these being the Wagon Label Clip with Block and the Vacuum release cord. The bolts were cut down a little later.

Eddie was on site, focusing on the all important task of keeping the site clean and tidy, he also continued with scraping down 786181’s sole bar.

Attention then turned back to the Mineral and a defective buffer. Mineral wagons have handed buffers unfortunatly we only have a right hand spare, as you look at the vehicle, until such time as a correct 2ft lefthand buffer can be sourced or the removed one repaired. We have elected to place the spare on upside down. This was an acceptable BR approach and allows the vehicle to operate.

The new buffer was then given a coat of bitumen before the heavens opened.

That completes another vehicle, although we do still have some planks to change and the inside faces to paint but aesthetically it can join the Mineral and its sister, taking pride of place on the turntable, for now at least.

We have chosen the livery of Henry Pooley & Son Limited. Renown for weighing equipment, from small platform scales to large locomotive sized weigh bridges. The company had a reasonable fleet of vehicles and the Medfit was a common vehicle type. 461074 is not a genuine Pooley vehicle but we thought the livery would make a nice addition to our fleet.

Finally, Dave has refreshed his stock of books, so if anyone would like to purchase a copy they are available direct from him.
Please visit https://www.bowerbooks.co.uk/ for further details and a chance to own this excellent book which details Dave’s experiences as part of the Department of Mechanical & Electrical Engineering and working on BRs test vehicle fleet.