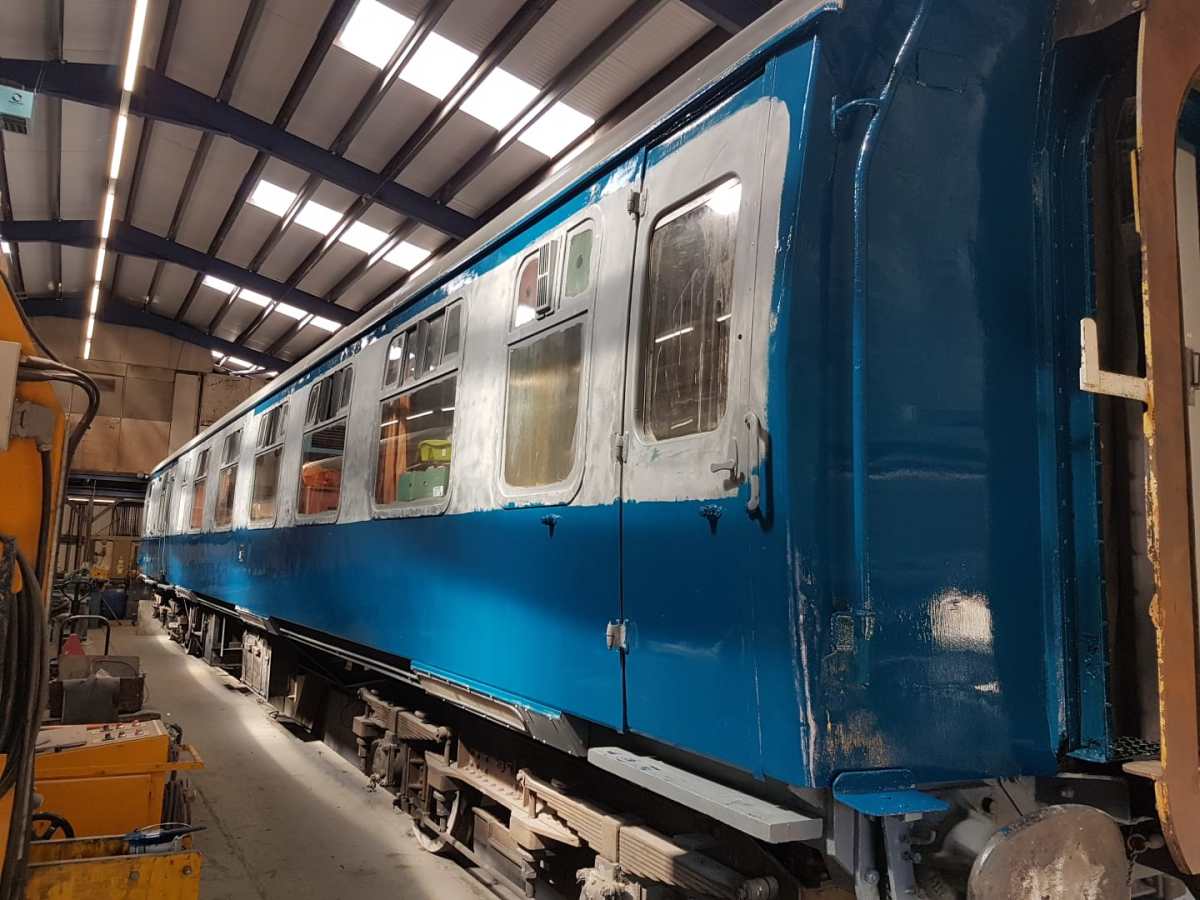 As Matt mentioned in last week’s update, I’ve had the past week off work and have spent it working at Rothley on the Living Van (we can’t really call it the Yellow Coach anymore!) Tuesday was spent painting the two sliding gangway doors into their first coat of gloss. Wednesday was spent sanding the undercoat on the bodysides with 400 grit paper, which left Thursday to finish off the sanding by hand in areas that couldn’t be done with the air sander and then to clean the coach down, ready for glossing at the weekend.

On to Saturday with almost the whole gang in attendance, the main focus was, naturally, glossing the coach, the first of many layers of paint were applied. The photos will let the cat out of the bag, so I might as well reveal that the coach is going to be Blue and Grey, in its BCK guise; SC21202. The first, and biggest bit of painting done was the blue. Gutters and Cant Rail, Ends and lower Bodyside. Dave started the second coat of blue on the internal portion of the corridor connection, with Richard on the body ends themselves. This left Matt, Nick and I to start the bodysides.

With that left to dry, the gang tripped to Quorn to trial load a British Railways Universal Trolley Equipment (BRUTE) into Nick’s new road vehicle to see if such an item would fit in readiness to pick one up.

It would also be remiss of me not to note that being the railways first special event since the COVID pandemic, the revitalised Mixed Freight has been in use, feature a majority of the repainted tank wagons.

The gloss used was re-coatable in 16-24 hours, so Sunday was pretty much a repeat of Saturday. Once finished, Dave, Jake, Nick and Richard moved to painting both the headstocks in gloss black.

Matt and I made some boards to put inside the bedroom and mess area windows on the compartment side instead of painting the windows out as was done previously.

I’ll leave the update there. We now have a coach that has 2 coats of Rail Blue, awaiting the grey, the lining and signwriting, and then the underframe. Matt has the week off work, so will be progressing the coach. I’m sure he’ll tell you in next week’s update. Join us next week and see what Matt and the rest of us get up to.