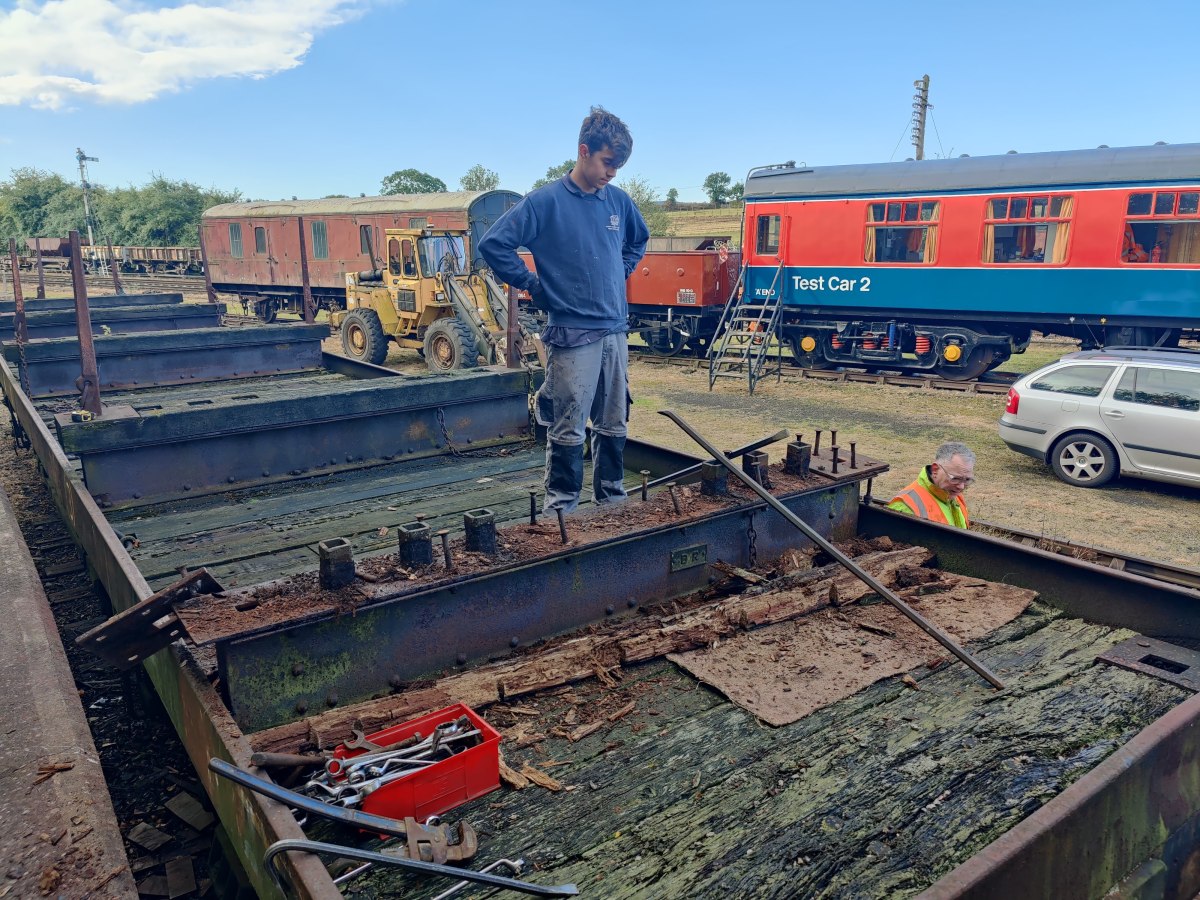 Welcome to this weekend’s update. As mentioned last week, the Railway has had its Autumn Gala where the van train and the Windcutter Group’s Mineral train have been running in an intensive timetable. This doesn’t stop play for us, although attendance this week hasn’t been good for various reasons. Nick was on a Cub Scout camp, Dave was helping his son at the Great Electric Train Show with West Hill Wagon Works, Jake was working Saturday and both Richard and Matt are still both feeling under the weather, which just left me for both days. I opted not to attend on Saturday due to the weather and not wanting to lone work.

Jake, Eddie and I were there on Sunday to begin work on the long awaited Bogie Bolster D, B928135. We are hoping that this will be a quick turn around as it takes up the space of 2 wagons! Jake and I started by stripping down the northmost bolster of its timber, which is rotten so needs to be replaced. Eddie made a start on scraping the solebar of the wagon.

I managed to get some of the coach bolts on the bolster undone, but Jake and I ended up breaking up the plank remove it. This wasn’t an arduous task given it was completely rotten. I ended up using the gas axe to cut the rest of the bolts off to finish dismantling the bolster. Eddie had joined Jake and I by this point and assisted with cleaning out the built up dirt, rust and detritus from around the bolster. We loaded the broken timber and rust flakes into the dumper for later disposal.

Jake and I moved onto other jobs on the wagon, such as freeing a stuck air brake cock and readying the vacuum cylinders for removal so we can overhaul them. Jake de-pinned the rigging from the cylinders and I stripped off the piston rod gaiter and the release valves. We’ve also identified some further work to the North End bogie brake rigging which will be carried out before the wagon returns to traffic.

Next weekend Dave will have the Test Car open at the request of the Bus Rally organisers, and we shall continue the work on the Bogie Bolster. See what we get up to in next week’s update.