A busy weekend for the team at Quorn, and a visit to Swithland. 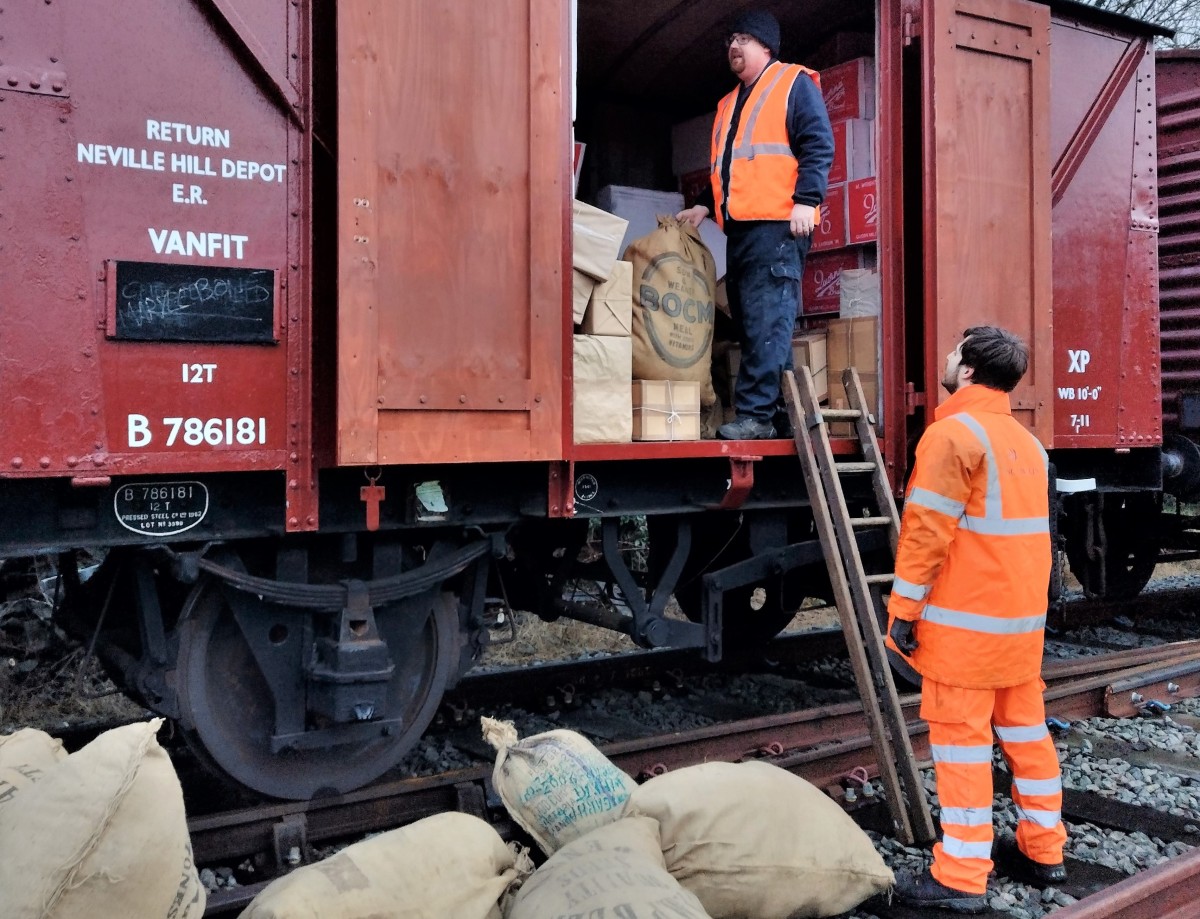 Our first full weekend of 2022 with most of the team on site started slowly due to the torrential rain on Saturday morning, however we kept ourselves busy labelling up some toolboxes and sorting some sacks ready for filling to create some additional theatrical loads. It was great to see Matt who has been absent recently due to struggling with health issues, nothing terminal but his involvement will be reduced until fully recovered.

Once the rain had eased Nick and Jake took a look at the north end screw coupling of Palshoc van B855667. The coupling that had been fitted temporarily last year during its restoration was slightly long being of the type more suitable for use on coaching stock, this meant that when coupled to an adjacent van there was a large gap between the buffers. A correct wagon type screw coupling with a shorter loop had been sourced and was fitted, centrally adjusted and oiled.

Matt, Ross and myself made a start of filling the theatrical load sacks with old clothing and carpet underlay to boost the amount of typical freight loads that can be used during demonstrations and upcoming events this year. A total of twelve sacks were filled and tied.

The next challenge was making space in a theatrical load storage van for the sacks, luckily it was just a matter of re-arranging what was in there and packing things more neatly.

In contrast to the previous day’s rain, the bright sunny start to Sunday saw Nick, Matt, Ross and myself make our way to Swithland sidings to attend to the securing ropes on container B55897B that is loaded in Medfit B458484 in readiness for it’s possible use during events in January. Although blocks and sleepers actually do the main task of holding the container, in order to give the prototypical look the ropes are fitted as per BR20427, Instructions for the loading and securing of containers on rail vehicles.

The visit to Swithland also gave us the opportunity to take a look round some of the wagon fleet that we haven’t seen for a while, it’s always good to keep a check on how things may be deteriorating but thankfully no major issues were noted, although it’s clear that some wagons will need to feature in the future work plan before too long, such as the two Tube wagons B732357 and E301588.

Once back at Quorn Matt and myself took the opportunity to have a cursory walk round the van train that was stabled in the sidings at Quorn. The paint on a few of the chalk boards was noted to be cracked and peeling off vans B780282, B786348, B850498 and B852838, mostly on the west side which seems to suffer more from the weather. The boards were sanded and repainted.

Ross continued with the inspection of the vans to determine which ones are going to be priority for attention to body side panels in the coming months, again an issue mostly on the west side of the wagons.

In readiness for an upcoming event in which the 17 strong van train is required, the operations department arrived with a Class 08 shunter to carry out a full-train brake test. D4137 was duly coupled to the south end of the vans and thankfully all was in order with the brake test.

We then concentrated on clearing up the yard ready for a temporary structure to be erected for which we have now received permission from the railway to proceed with. The Volvo was rather reluctantly coaxed into life to assist with moving a few heavier items, and it was great to get Madge started after a long period out of use, although she didn’t start first time, this was down to using a bit too much choke; once she’d fired up she ran smoothly.

The end result of the yard tidying was a nice clear area ready for the next stage.

Our afternoon was spent in the company of Nick Brodrick, editor of Trackside Magazine who came along to meet the team and see what we’re up to.

Needless to say this involved some photographs, thankfully the afternoon sunshine didn’t disappoint.

Thanks for reading, join us again next week; in the meantime stay safe.

One thought on “Couplings, Sacks and Ropes”